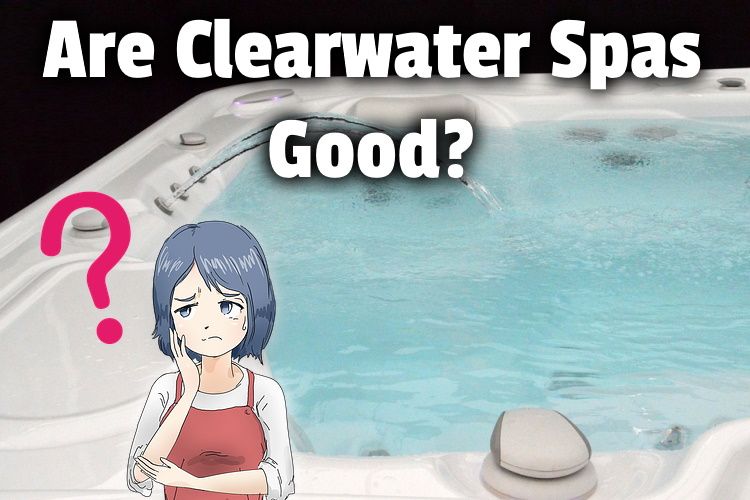 I had heard of Clearwater Spas but didn’t know much about them. But just because they aren’t as well known as some of the better-known brands, doesn’t mean they aren’t high quality, so I wondered are Clearwater spas good?

Here’s what I discovered after looking into them:

Clearwater Spas make some very good hot tubs from basic to extravagant. Their tubs are built using parts from well-known companies such as Balboa. However, they have begun to get a lot of negative reviews over the past 2 years.

Aside from that, there are other informative things I discovered, including 1 thing that is make-in or break-it for me. Read on!

Looking to get a quote on a new hot tub?

Clearwater Spas use parts from 3 of the top hot tub parts manufacturers; Balboa, Waterway, and Gecko, and come with a 5-year equipment warranty. The shell also contains salt borates, a natural repellent for rodents and insects.  They also use green technology and have greater energy efficiency than most brands.

Build specification is at the heart of their quality. The base is made from recycled ABS plastic that is injection-molded. Its rot-free PVC foundation supports make it so strong that they offer a 20-year guarantee on the structure.

The nice thing about using parts from other manufacturers is they can easily be replaced, unlike some of the more expensive tubs that use proprietary parts.

When it comes to ecology, Clearwater has created one of the best hot tubs you will find.

No fiberglass resin or other destructive agents are used in the manufacturing process. Their EcoSpray finish has no styrene content and does not release volatile organic compounds (VOCs) into the air.

A reflective thermal barrier is also incorporated in the shell, making their spas 12% more efficient than others on the market.

And because they use environmentally responsible components and construction techniques, Clearwater Spas carry the E-Smart technology symbol on all their products.

How are the Clearwater Spas reviews?

Clearwater Spas has 2.5 stars on Yelp from 17 reviews, an A+ rating with the Better Business Bureau with 0 reviews and 0 complaints, and while their manufacturing facility does not have a Google rating, their factory showroom has 3.4 stars on Google from 43 reviews.

So in all honesty, their reviews are mediocre.

However, the complete lack of bad reviews or complaints on the BBB site does indicate that things aren’t terrible. If they were, they would have tons of complaints on there, as many well-known hot tub companies do.

The reviews on Yelp that are bad (10 of the 17) all paint a similar situation:

Ultimately these people feel duped as they all paid $10,000 (or more) for a hot tub they essentially can’t use.

It’s also worth noting that all of the good reviews on there are anywhere from 2-7 years old while the bad reviews are mostly 2020 with one or 2 from 2019.

So it seems like perhaps they were a good company that just can’t keep up. But it’s worth noting that they’ve been in business since 1976, and it’s hard to be in business that long if you’re not a decent company.

Hosting guests for the holidays? Hop in the #HotTub for a chance to relax and catch up! pic.twitter.com/yH566c5YR8

How do you drain a Clearwater Spa?

To drain a Clearwater Spas hot tub, find the drain valve and connect a garden hose to it. Run the other end of the hose to an inconspicuous part of the yard away from tree roots and flower beds. Open the valve to drain, which will take approximately 2 hours.

Alternately drop a submersible pump in the deepest part of the tub and run the hose and it will drain in 15 minutes. Check out this submersible pump on Amazon. It’s the one I bought, and it works great!

You should change your water every 3 months depending on how often you use it, but on average, around three times a year. I covered this in a recent article, and you can see it here on my site by clicking on the link.

Don’t wait for the water to get murky.

To drain a Clearwater Spa, first of all, you need to get everything ready and plan how you are going to do it. Where do you want the water to go? There will likely be more than 300-500 gallons to come out, and you won’t want that spilling out onto your lawn or flower beds.

There may be local restrictions on disposing of the water down the drain as well, so check that out before you do anything.

You also need to make sure your hose is long enough to reach the area where you want the water to go. Aim for somewhere within 25’ if you can.

Did you know you can even be friendly to the environment by choosing the right #HotTub? https://t.co/0ouUnz28rS pic.twitter.com/7soyUpLOUi

How many different hot tubs does Clearwater have?

Clearwater Spas has 26 models in 6 ranges:

They don’t provide pricing information; you can only get costs from dealers and they will want to carry out a consultation before providing an initial estimate (everything is negotiable). But Clearwater does split their series into price ranges, and you should be able to get a good one for about $10,000.

But you can also go crazy with their luxury and extravagant lines!

All of these models have ergonomic seating and SpaTouch controls to allow easy control of pump speeds, water temperature, and mood lighting while you’re in the hot tub.

MicroSilk Skin Therapy is available on the Peal Island and Tradition models. This creates oxygenated micro-bubbles to8 clean the pores of your skin.

Some of Clearwater’s hot tubs have an optional Salt System.

It is a natural water purification system that reduces the number of chemicals needed and the number of water changes. This system can also create the exact amount of sanitizer needed to maintain crystal clear water.

Ozone, on the other hand, helps clean water naturally with fewer chemicals.

Using the latest technologies in ozone water purification, the Ozonator uses corona discharge to produce ozone, a standard feature on the Evergreen series.

Unwind & unplug from the holidays! Take time out as a family! #HotTubs pic.twitter.com/XhcPdwlnTt

What are some common Clearwater spa problems?

Being unable to contact Clearwater Spas for service is a frequent issue mentioned in their Yelp reviews. But other problems have been reported with the heater, water sensor, and Ozonator.

Clearwater Spas are among the most reliable hot tubs on the market because they use quality parts from manufacturers such as Balboa, Waterway, and Gecko.

However, things can sometimes go wrong, and when they do, you should see an error code on the display panel.

Most of these can be fixed by simply resetting (turning off and on after about 15 minutes), but if this doesn’t work, you may need to replace the faulty unit.

It is unlikely that the heater or pump will need replacing, but if they do, the good news is the parts are readily available from many dealers, so you won’t have much downtime.

As I’ve mentioned, from some of the reviews over the last 12 months or so, Clearwater Spas are not great on customer service, and this is something they need to work on. A rating of 2.5 stars out of 5 on Yelp is not good.

Prevention is always better than the cure, so just carrying out a few simple things will keep everything running smoothly without a hitch.

These are the things you need to concentrate on:

Do these things, and you should be fine.

Give the ultimate gift this year with a little help from us at #ClearwaterSpas!
https://t.co/LJpgdNQlIj pic.twitter.com/rdnSCKrvR3

Clearwater Spas are based in Woodinville, close to Seattle in Washington, where they have been manufacturing hot tubs since 1976.

From here, they supply hot tubs all over the world, with a strong presence in Britain and parts of northern Europe.

Work started last year on a new facility on the Gayteway Business Park close to Arlington Municipal Airport in Washington, which will increase productivity and improve access across the globe.

Maybe this will help with the issues raised by certain dissatisfied reviewers.

Don’t get confused over the name. Clearwater Spas Inc is an entirely different company based in New Castle, Delaware.

They deal only with Caldera, Freeflow, and Nordic hot tubs. They don’t build them. Clearwater Spas make their own hot tubs; they don’t deal with any other models.

Did I cover all you wanted to know about whether Clearwater Spas are any good?

Clearwater Spas is one of the top brands of portable hot tubs.

They have a good range to suit all requirements from the single pump Lite series up to the four pump Resort series with some great ergonomic designs and a fantastic array of jets for all kinds of hydrotherapy.

They are tough and will withstand a lot of heavy usage, and the materials are environmentally friendly while at the same time warding off rodents and insects.

If this is your first time buying a hot tub, you should read this recent article on my website before you do anything. Just click on the link to read about the 23 crucial things to consider before buying.

link to Can You Use Essential Oils or Aromatherapy in Your Hot Tub?

Many hot tub owners equate hot tub use with visiting a spa. And a spa experience gets enhanced through our sense of smell. So can you put essential oils in your hot tub? As a general rule, avoid...

If you’ve never purchased a hot tub before, the shiny jets and sleek exterior of each one you see might appeal to you. But not all hot tub brands are the same. Without proper research, you’ll end...