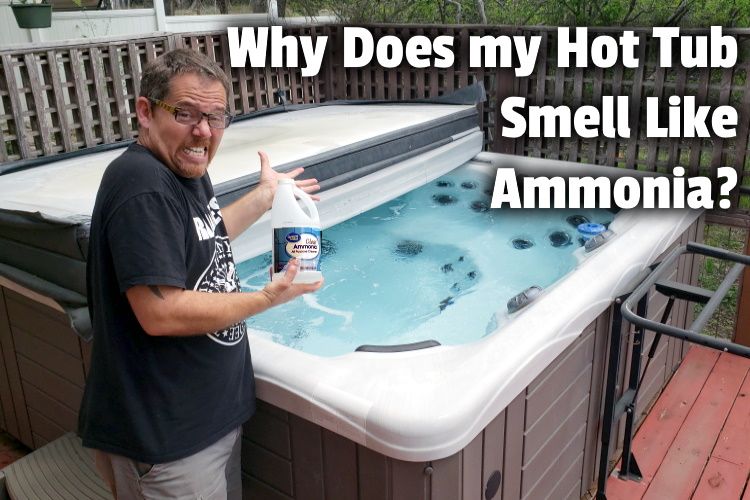 A foul-smelling hot tub is a common issue for most hot tub owners. But the odors can, unfortunately, come in many different forms. One common question people ask is, why does my hot tub smell like ammonia?

Here’s what I’ve learned over the years:

As a general rule, when a hot tub smells of ammonia, it is due to perspiration, oil, and/or urine left unknowingly by users and reacting with the chlorine in the water. This turns the chlorine into chloramines and reduces its effectiveness in sanitizing the water and requiring action to fix.

Fortunately, there are simple and effective solutions to remove the awful odor.

So in this article, we’re getting into the who, what, how, when, and why this might be happening, how to stop it, and how to fix it when it does happen.

#Hot_Tub_Bromine can be an option to chlorine as it generally does not have such a pungent smell. pic.twitter.com/537uUPFMXS

Is it normal for hot tub water to smell like ammonia?

In fact, a hot tub shouldn’t have an offensive smell at all.

If a hot tub is being properly maintained, there’d be no ammonia smell, just the smell of the sanitizer used in treating the water.

The ammonia smell is a sign that the hot tub hasn’t been properly sanitized. The ammonia-like smell is triggered by the presence of chloramines in the hot tub’s water.

Chloramines? Yes, what are they, and are they harmful?

This results from nitrogen (ammonia) being more attracted to the chlorine atom than the hydrogen atom. The foul smell is common when bromine is used as a starting stabilizer.

Chloramines can cause leaching of lead from lead pipes.

This lead leached by chloramine could lead to lead poisoning. And lead poisoning can lead to neurological damage, other health challenges, and even death in small children.

Luckily, that’s a non-issue in most modern hot tubs. But it could be an issue with old hot tubs or possibly in-ground hot tubs.

Chlorine is one of the chemicals used in treating water, while ammonia, in this context, is from perspiration, oil, and urine, unwittingly left in the tub by bathers. They form an “unholy alliance.”

Apart from the smell, there are times when a hot tub is cloudy, right?

What causes it? In a recent article of mine, an in-depth expose, I examined all the possible causes and how you can fix the cloudy and smelly tub.

Hired a hot tub since we’re depressed over @glastonbury and the combination of smells of chlorine and sun cream, plus the feeling of the sun on my face is making me feel like I’m abroad 😍.

Does bromine cause an ammonia smell in a hot tub?

Bromine does not cause the same chemical reaction as chlorine that can create an ammonia smell in a hot tub. So ammonia odors in a hot tub are less common when bromine sanitizer is used but can still occur if chlorine shock is used.

The smell is not caused by bromine but by chloramines, which are chlorine molecules that have gone bad. They are effectively chlorine’s waste products. Bromine is an alternative sanitizer that I use and prefer than chlorine.

Why? Chlorine and heat do not play nice together.

Chlorine is great for swimming pools, where the temperature is not high. But, in a hot tub, it breaks down faster. It also has a drying, stingy, and of course, stinky character.

If you have sensitive eyes, skin, and nose, you want to be careful with how you use chlorine.

Chlorine sanitizer has to be used multiple times throughout the week due to how quickly it breaks down. With the bromine tablets I use, I simply put 4-6 in a floater weekly, and that’s it.

Now, bromines also produce a waste product, bromamines, but these are not as noxious as chloramines.

Bromine is a more stable sanitizer, even when applied in water that’s high in temperature. It’s gentler on the skin, and its effect on your hut tub water lasts longer.

But both should never be used together as a sanitizer! You have to choose. But it is OK to use bromine sanitizer and chlorine shock.

Don’t forget to shock your hot tub! Much like a swimming pool you will want to make sure you are shocking your spa at least once a week to help maintain a chlorine residual and remove contaminants from the water. pic.twitter.com/ichnD8wnEO

Should I avoid my hot tub if it smells like ammonia?

As a general rule, never use a hot tub that smells like ammonia. The ammonia smell is a sign that something is not right and may not be safe or pleasant to soak in.

It’s either a sign the water’s been improperly treated, or it’s due for another treatment.

In fact, it’s a reaction of chlorine and perspiration, oil, and urine. It’s gross, and at the same time, it reduces the pleasurable experience you’re hoping for.

The smell is due to chloramines which we looked at in an earlier section.

They are chlorine molecules that have “spoilt.” This occurs when ammonia gets more attracted to the chlorine atom than the hydrogen atom. It’s the reaction that gives off the awful odor. You don’t want to sit in that.

We’ll look at how to get rid of the smell in a bit. You might also be curious about how often you should change your hot tub water.

A recent article of mine offers tips. In it, I explained that 3-6 months is ideal, depending on the frequency of use.

And that you should ensure proper water chemistry through testing and adjusting. The filters should be cleaned regularly and replaced as needed.

Just click that link to read the article on my site.

Did you know that it’s not enough to just use 🌊 chlorine in your hot tub’s water? 💧

You should also be using a large dose of oxidizer to “shock” ⛈️ the water into a clean state when it has been contaminated. (tweet continues) pic.twitter.com/sICXOuykSD

How do I get rid of the ammonia smell in my hot tub?

Add chlorine shock to eliminate ammonia in a hot tub. This converts the chloramines back into chlorine. Add 10 ppm (parts per million) chlorine and run the jets with the cover open. Test and adjust the chemicals as needed. If the chlorine levels are too high, wait 24 hours and test again before using.

Remember, chloramine is a mix of chlorine and ammonia.

As I explained earlier, the ammonia smell is because of a bond between chlorine and ammonia. Even though you’ve added chlorine to the tub, it may not show up when you use a test strip to check the level of FREE CHLORINE (FCI). Why is this so?

This is because ammonia is effectively suppressing the activity of the chlorine. It inhibits the effects the chlorine is supposed to have.

So, what’s the solution? You have to break that bond by super-chlorinating the water: you’ll have to add more chlorine.

Then, balance your water chemistry again.

The smell should be gone. But if it’s not. You could simply drain the water and replace it. And balance the water chemistry again.

Do try to avoid hot tub #scent which are #oil based. They have the tendency to unbalance the #water in your hot tub. pic.twitter.com/4vsEBUWHqZ

How can I make my hot tub water smell better?

Just don’t use them to cover up a bad smell. Bad smelling water is a sign that something is wrong and should be dealt with and corrected.

But spa crystals give off a pleasant, subtle fragrance.

An awesome one I like is Spazazz Spa and Bath Crystals on Amazon. It’s got over 100 reviews on Amazon, and most are 5-star.

They are not only oil-free but promote improvements with both inflammation and stress relief. And they come in several different scents.

Just add a few scoops into your water, and you’re on your way. It promotes total relaxation while leaving your skin soft. And it’s free from chemical odors.

In addition to spa scents, you might be wondering if it’s okay to use bath salts in your tub?

In a recent article, I explained that bath salts, especially Epsom salts, are not ideal for hot tubs because if the salt is magnesium-based, it can cause flash burns when mixed with chlorine. I also suggested what to do instead.

A foul odor is the last thing you need when you’re hoping to have a relaxing and fun time soaking.

We looked at what causes ammonia smell.

It’s due to chloramines, a waste product of chlorine, a sanitizer for keeping hot tub water clean. The smell is released when chlorine and ammonia (perspiration, oil, and urine) bond. We saw that it’s best to avoid using the tub when it’s giving off the smell and to get the water treated as soon as possible.

We also explored bromine, another sanitizer, and we found out that it doesn’t trigger ammonia smell. I shared a few reasons why I use and prefer bromine to chlorine.

We looked at what to do to remove the ammonia smell and wrapped up our exploration by considering what you could use to make your tub smell better.

link to Can You Put Essential Oils in Your Hot Tub?

Many hot tub owners equate soaking with visiting a spa. Naturally, that makes some people want to not only enjoy the warm water but also enhance the experience through our sense of smell. So can you...

Continue Reading
link to Hot Tub Water Cloudy and Smelly? Here's How to Fix It!

There's nothing worse than coming home after a long day of work, wanting to soak in your hot tub, only to find the hot tub water cloudy and smelly. I've dealt with this before, and here's what I...

Hi! I'm Jeff Campbell. I was a leader for Whole Foods Market for over 2 decades and currently help run a large martial arts school (primarily) for kids. When I'm not spending time with my wife & 3 daughters, I can usually be found practicing martial arts, making music, blogging on my other blogs over at KitchenApplianceHQ.com and Middle Class Dad or, of course, sitting in our hot tub!

Hot Tub Owner HQ is owned and operated by Jeff Campbell/Middle Class Dad. Middle Class Dad is a participant in the Amazon Services LLC Associates Program, an affiliate advertising program designed to provide a means for sites to earn advertising fees by advertising and linking to Amazon.com. Middle Class Dad also participates in affiliate programs with Siteground, Clickbank, BuyerZone, CJ, ShareASale, and other sites. Middle Class Dad is compensated for referring traffic and business to these companies, but in no way increases the cost to you if you opt to make a purchase from my links. *Please note that I am not liable for quotes, products, claims or any work performed through BuyerZone or its suppliers.