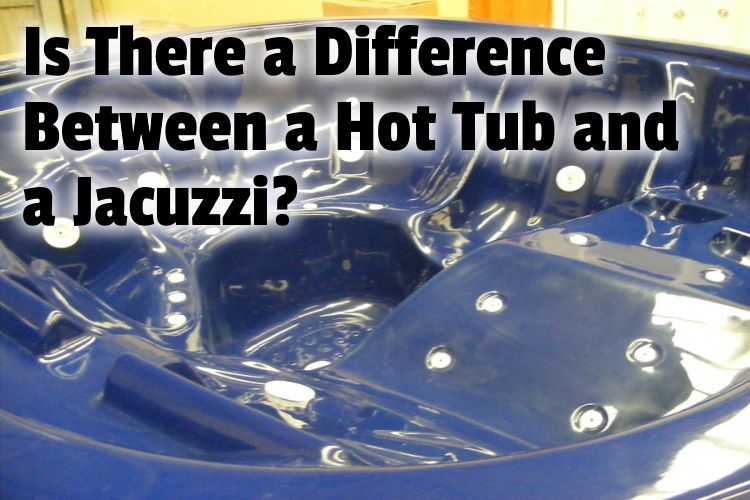 Confused by the terms Jacuzzi and hot tubs? Jacuzzi suggests something upscale and exclusive, perhaps even exotic. Hot tubs, not so much. But is there a difference between a hot tub and a Jacuzzi?

Here’s what I know from having owned 4 of them:

Jacuzzi is simply a brand name and a manufacturer of hydrotherapy and bath products which include but are not limited to hot tubs. They are also the inventor of the modern-day hot tub. Because of the longevity of the brand name, Jacuzzi is often used to describe any brand of hot tub.

It’s kind of like how we say xerox when we mean copier. Or Kleenex for any brand of facial tissue.

But, we’ve only just begun.

In this article, we’ll check out why it is called a Jacuzzi, whether Jacuzzi makes hot tubs and bathtubs, and if they invented the first hot tub.

Got the new hot tub 👍🏼 it’s even got RGB! 😆 #jacuzzi #SummerVibes pic.twitter.com/UKpTCd3xAs

Why is it called a Jacuzzi?

The term Jacuzzi is named after Giocondo Jacuzzi, the Italian who founded the Jacuzzi company in California in 1915. The company invented the first hot tub in 1970 and also invented other products that gained worldwide popularity.

The company has been so successful that its name came to stand for a product when in point of fact, it is one of the reputable brand names in its niche.

Jacuzzi is the quintessential American success story. Its pioneers were 7 brothers who had emigrated from Italy to start a new life in California.

On arrival, they bought a small machine shop and established Jacuzzi Brothers incorporated. They started by manufacturing wooden propellers for the military and even a monoplane!

When one of the brother’s toddlers developed arthritis, they designed a pump, the J-300.

It could be submerged in a bathtub to provide hydrotherapy treatments. In 1968, they created the first integrated whirlpool bath, and two years later, they invented the hot tub.

Oooh lala. Nothing says, “#Romance” like a bubble bath in one of our #Jacuzzi tubs! #LoewsNewOrleans #ValentinesDay pic.twitter.com/3vyUAQBPLW

The company is one of the pioneers in the industry, and naturally, their hot tubs and bathtubs are arguably the gold standard.

They have a lot of different types of first-class hot tubs — these have different shapes, color, build, and prices. They are so beloved by the market that 98% of the owners of such hot tubs recommend them to others.

They are reflections of state-of-the-art engineering and are gorgeous.

For example, most models feature classic and rotational jets to provide a soothing massage. The seats are also ergonomically designed, with the capacity to seat 5-6 people. The company has 5 collections: J-200, J-300, J-400, J-500, and the J-LX.

There are several bathtubs available, too.

There are models meant to be installed in a bathroom, and there are free-standing ones too. Interestingly, they come in slightly different shapes.

So, you don’t have to settle for the regular rectangular model.

Was Jacuzzi the first hot tub?

The portable hard-sided hot tubs we think of today were invented by Jacuzzi. However, the Romans invented spas, and in ancient Japan, the use of freestanding wooden tubs was common.

They’re the first to market a self-contained whirlpool bath system in 1968. Roy Jacuzzi, one of the sons of the company founders, made the first hot tub commercially available.

These Jacuzzi tubs are the precursors to the modern hot tub. The first model they sold was known as “Roman Bath” — an obvious homage to the hot tub’s roots.

Before the production of these models, in 1948, one of the founding fathers, Candido Jacuzzi, had devised the idea of installing an aerating pump in a bathtub as a way to provide some relief for his son who was suffering from arthritis.

Did you know there’s a good time to buy a hot tub?

I revealed it in a recent article of mine. I explored themes such as whether hot tubs are cheaper in winter, what’s a good price for a hot tub, and how many years outdoor hot tubs last.

Are Jacuzzi hot tubs worth the money?

Jacuzzi hot tubs are worth the money because they are the benchmark against which other hot tubs are measured. Jacuzzi invented the industry and is still dominant half a century after they started selling the first hot tubs. They are not the only high-quality manufacturer, but they are one of the best.

The products come with many options and are easy to use. It’s common knowledge that Jacuzzi hot tubs are the “Holy Grail” of hot tubs.

Those who own other models love to soak in a Jacuzzi whenever they have the opportunity. And the company states on its website that 98% of the owners of Jacuzzi hot tubs recommend them to others.

It’s also worth pointing out that the Jacuzzi company also owns and sells hot tubs under a few other brand names too, such as:

So how do you decide which brand of hot tub to buy?

A recent article of mine looks at 23 crucial things to know before buying a hot tub.

In it, I shared answers to all the top questions you need to know before you walk into a showroom, including at least 3 you probably haven’t thought of.

It’s time to have fun and relax in a #Jacuzzi hot tub with Family.#Verdure #MidWeekMotivation pic.twitter.com/5qWF4XtGZx

Are Jacuzzi hot tubs better than other hot tubs?

Jacuzzi hot tubs are better than many other brands of hot tubs. But they are not the best, as their D- rating with the Better Business Bureau attests. However, they still have many outstanding features that are worth considering.

Why do they have such a terrible rating?

Well, the BBB largely bases its score on how well the company responds to complaints. So, in theory, a company could get thousands of complaints, but if they respond to all of them in a timely manner, they could get an A+ rating.

It’s also worth pointing out that the BBB isn’t totally impartial.

That’s because they want the business to pay them a fee to become “accredited”. Now, do they favor accredited, i.e., paying clients, with better ratings? I’m not saying that. But anytime money is changing hands, I think some credibility gets lost.

You guessed it. Most manufacturers were shut down at least half the year and/or had trouble getting enough workers. Plus, demand for things we use at home went way up since many were working from home.

So being able to fulfill orders became a challenge for all manufacturers of just about everything. So I think it’s important to consider that in deciding whether Jacuzzi is a quality company or not.

What are some of the features that make Jacuzzis better than others?

First off, the shell is manufactured using a process that’s called trifusion. It helps in the production of the sturdiest shells. Trifusion is a fiber-glass construction.

The process is one of the most vital ingredients because every other feature depends on the quality of the shell. This is one key reason Jacuzzis are so strong and durable. So, the company doesn’t try to save costs here.

It also has exclusive, proprietary PowerPro Jet and Classic Jet systems that make the soaking experience highly soothing, as you experience an in-water massage.

Jacuzzis are designed with first-rate insulation in mind, and it comes with a full-foam that covers the shell and the skirt. The implication is that the Jacuzzi tub heats up faster, retains warmth better, and helps reduce your heating cost.

There’s also the classic waterfall, which allows you to release a torrent of hot water across your shoulder.

By the way, how many years does an outdoor hot tub last?

In this article, we checked out why it is called a Jacuzzi and whether Jacuzzi makes hot tubs and bathtubs.

But we also found out whether Jacuzzi invented the first hot tubs. Then, we looked at whether their hot tubs are worth it.

Finally, we wrapped things up by finding out if Jacuzzi hot tubs are better than other hot tubs.

jacuzzi 3 by hidromasajesvillarreal is licensed under CC2.0 and was cropped, edited, and had a text overlay added

Continue Reading
link to What's the Best Time of Year to Buy a Hot Tub? (hint: there is one)

For some purchases, like cars, there’s a certain time of year when prices are a lot lower. But what about hot tubs? Do they have a special time of the year that could net you some big savings? So I...