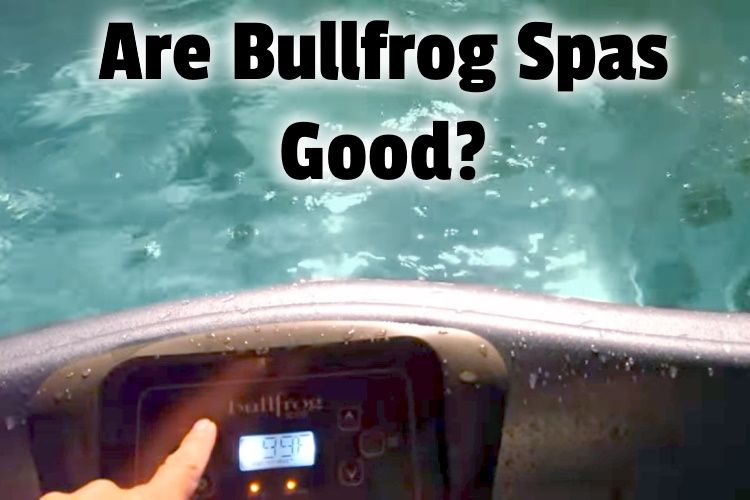 There are a ton of hot tub manufacturers, and some are definitely better and more reputable. But one you hear about a lot in an affordable price range is Bullfrog. But are Bullfrog spas good?

Here’s what I know from looking into it:

Bullfrog Spas is an excellent brand of hot tub, with an A+ rating with the BBB and a 4-star rating on Google. Their proprietary JetPak Therapy System is virtually leak-proof, and they are typically associated with higher-end luxury hot tubs.

But that’s just a quick snapshot.

So in this article, we’ll do an in-depth look at Bullfrog Hot Tubs. We’ll cover all the different, features, models, and options, including whether or not they are cheaper when you buy them at Costco.

Carry on reading to find out if a Bullfrog Spas hot tub is the right one for you.

Want to get the lowest quotes on a new hot tub?

@_itskye We usually put them in backyards but we’re open to new things. Here’s our new hot tub. #hottubs pic.twitter.com/aB2j5Lguoc

Are Bullfrog spas worth the money?

Bullfrog Spas are worth the money because their hot tubs have many unique features that make them more economical to run. The JetPaks use 90% less tubing than a conventional system, resulting in lower running costs and fewer leaks.

Bullfrog Spas make a mid to high-range hot tub at reasonable prices, and they always show up as a top ten buy in many polls.

Most review websites list them among the Top 5 hot tub manufacturers. The only usual criticism is that they do not offer saltwater or UV-C sanitation options.

Are they worth the money?

Well, they have an excellent range to suit most budgets, and if you were looking at spending around $11,000, you would have 23 models to choose from. This is more than many in this price bracket.

The water care system has three elements that make it one of the best around:

These come as options on all hot tubs and can be selected collectively or individually to suit your preference and budget.

If this is your first plunge into the world of hot tubs, you might want to check out this recent article on my site – twenty-three essential things to know before deciding which one to buy. I get into all the top questions to ask, and I even include the surprising statistics from an audience poll I conducted too.

Friday the 13th. I’m going to have to hang out in my hot tub all day, you know, to be safe. #FridayThe13thProblems pic.twitter.com/rBmk3U9i5Q

How long do Bullfrog Spas last?

A Bullfrog Spa should last between 15 and 25 years if water chemistry and filter maintenance are performed regularly. The cover, however, typically needs to be replaced after 5-7 years.

Bullfrog Spas use ABS frames and bases rather than metal or wood, so there is no risk of rusting or rotting over the years. This carries a lifetime warranty, with a 10-year warranty on the shell structure.

Many of the parts used to build a Bullfrog Spa are patented, such as their JetPak Therapy System.

And these can only be replaced through the manufacturer or their official dealers, but this won’t happen often. The plumbing is mainly contained in the JetPak system, so a Bullfrog hot tub contains 90% less pipework than most other makes.

The JetPaks, heaters, pumps, and other equipment and plumbing carry a 5-year warranty, while the spa cover is warranted for three years.

The control panels are made by the Balboa Water Group, and these are renowned for their reliability, but if they do go wrong, they are easy to replace because most suppliers stock Balboa parts.

The lifespan of other parts such as the heaters and pumps will be maximized by keeping the water sanitized.

And that means cleaning the filters regularly and changing them every year or two depending on usage. You also need to add sanitizer such as chlorine and check pH and alkalinity levels as with other hot tubs.

But the Ozonator will reduce the number of chemicals required.

What are the different models of Bullfrog spas?

Like many hot tub manufacturers, Bullfrog doesn’t list prices on its website, but it does provide a range of prices for each series. The letter ‘L’ in the model number denotes a lounge seat.

*Apart from the X series the number of jets refers to JetPaks, Bullfrog’s proprietary therapy system, and each one of these contains up to 10 controllable jets to give a range of hydrotherapy effects.

The force is strong with this one. With the hot tub. It has strong jets. http://t.co/rx4lfvzkdW #MayThe4thBeWithYou pic.twitter.com/ZYtSWBELUo

How long has Bullfrog Spas been in business?

Bullfrog International was established in Salt Lake City, Utah in 1998, but founder David Ludlow started with an idea to create a leak-proof hot tub in 1989.

So, in total, Bullfrog Spas has been in business for three decades!

One thing that has made Bullfrog such an endurable brand is its unique JetPak Therapy System, which gives you 18 massage therapy options.

These are adjustable to target different parts of the body, from the 42 jet RainShower pack giving an overall massage to the high-intensity NeckMasseuse pack, which has nine powerful jets.

This means you get to customize your hot tub on all but the X Series.

The Jetpaks are interchangeable, offering 16 options for each seat. This results in less tubing than other hot tubs, which increases their energy efficiency. Customization does not end there.

With their SpaVault In-ground hot tub kit, you can install any of their portable hot tubs in the ground or within a raised deck.

Sometimes, Bullfrog Spas are referred to as Jacuzzis, but they are of an entirely different make.

Jacuzzi is often used as a generic term for all hot tubs, and I discussed this in more detail in a recent article. Just click on the link to read it on my website.

Do you only buy Bullfrog spas at Costco?

Bullfrog Spas were sold at Costco at one time, but always in addition to being available at other dealers as well. But currently, Costco only sells Bullfrog Spas during limited event roadshows at specific locations around the US.

So don’t expect to find Bullfrog by using the Costco website search bar.

You also won’t find Bullfrog hut tubs when you walk into your local Costco. Instead, the only way to get them as of this writing, if you want to buy from Costco, is at one of their traveling roadshows. Check out the dates and locations for all scheduled roadshows on the Costco website.

But don’t worry, Bullfrog Spas supply to plenty of dealers right across the United States.

There are also dealerships in Canada, South America, India, Australia, and New Zealand. Through their partners Villeroy and Boch, Bullfrog Spas serve the UK and the rest of Europe, giving it worldwide coverage.

To find a dealer near you, go to Bullfrog Spas’ website.

There were some advantages of buying through Costco rather than from a dealer when Costco was selling them.

These included the fact that they allow you to return your hot tub within a year of purchase with a full refund if you don’t like the one you bought. The downside? You might not get the same service agreement certified dealers offer.

Did I cover all you wanted to know about whether Bullfrog Spas are any good?

In this article, we took a deep dive into Bullfrog spas and their unique features.

We examined how and where they are built if you can only get them at Costco, and ultimately if they are a good quality hot tub.

After all, even if you’re on a tight budget, you still want to buy a quality hot tub. Do you own a Bullfrog?

Still photo was taken from video – Enzo the dog. Learning to swim. Bullfrog Hot Tub. by jairosoft is licensed under CC2.0

Continue Reading
link to How Much Does a Hot Tub Cost Per Month to Run?

Hot tubs aren't known for being inexpensive. But even after you pay a lot to buy and install your hot tub, there are the ongoing costs of chemicals and electricity. So how much does a hot tub cost...